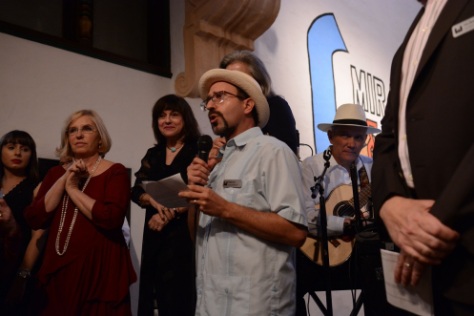 Since 2004, Dr. Frank Luca has split his time as a professor of History at FIU and Chief Librarian at The Wolfsonian. He received a Ph. D. from FIU in 2005 with a focus on Ethnohistory and Colonial Latin America. He has successfully fused his passion for both American history and film with his courses on America and Movies (AMH 3317).

I have always been a voracious reader and especially drawn to works of history and novels set in the past. Finding it difficult to choose between English literature and history, I pursued a double major as an undergraduate at Colby College. But it wasn’t until I took my first film course (also at Colby) that I gained an appreciation for film as a medium for telling stories. In this class, students watched the same film twice, back to back. The professor insisted on this method so that on the second viewing, the class would be so bored with the plot, they would instead concentrate on the filmmakers’ techniques for telling their story. While I do not use that same method with my own students, I find that viewing the film in class and discussing it immediately afterwards is important so that each student’s observations and perceptions collectively add to our ability to deconstruct and analyze the film.

2. What is appealing about moving pictures and what draws audiences to the medium?

What I find most appealing about viewing a film is the medium’s mimicking of the human memory. Our brains are wired to focus on certain images, to recall certain scenes in our own lives much in the way that films can do through the use of flashback and other techniques. Depending on the topics of my course, I often begin my classes with early silent classics. While these can be challenging for young audiences used to contemporary films that depend on car chases, explosions, and other special effects to keep the audience riveted, these “quiet” films can be quite wonderful in exposing students to non-verbal acting styles, visual film techniques, and more subtle methods director’s used to tell their stories and advance their agendas.

3. What is the relationship between society and the movies? Do you think films shape the audience or the other way around?

Unquestionably, films both reflect societal norms and shape the way an audience views the world in which they live. As an example, gangster movies and films set in the “roaring twenties” were extremely popular in the early 1930s, partly because of the unpopularity of Prohibition (1919-33) and the onset of the Great Depresson (1929-39). Depression-era audiences who lost their life savings when the Stock Market crashed and banks failed were eager for escapist entertainment that reminded them of better days—the era of sexually-liberated “flappers,” and the lavish lifestyle enjoyed by bootleggers and bank robbers who went from rags to riches overnight. The Motion Picture Production Code (also known as the Hays Code), a form of Hollywood self-censorship, was imposed in 1930 because of the recognition that cinematic “entertainment and art are important influences in the life of a nation.” While filmmakers making silent and early “talking” films in the 1920s and early 1930s had considerable artistic freedom, a backlash of state-sponsored censorship laws forced Hollywood to adopt the self-policing Hays Code. The Code was rigorously enforced between 1934 and 1954 with the aim of curtailing what the moral authorities of American society deemed prurient and violent motion pictures that provided sympathetic treatment of “crime, wrongdoing, evil or sin.”

4. Film historians have often faced criticism for their appreciation of controversial films (i.e. D. W. Griffith’s The Birth of Nation or Leni Riefenstahl’s Triumph of the Will). What is your opinion on the morality of acknowledging the success and innovations of films which promote unethical ideals?

As a professional librarian as well as a professor who regularly teaches a course using films, I am steadfastly opposed to censorship regardless of the controversial nature of the political opinions expressed in a film. This is especially important in viewing historical films, where a contemporary audience might rightly feel indignation at racist, sexist, or other unsavory views expressed by the filmmaker. Such views, however socially or politically-incorrect they might appear to us today, are reflections of the times the film was made and are therefore important as primary sources of what people believed and how they behaved at that time. Film is and has always been a persuasive as well as entertaining art form; the best antidote to controversy in film is not to ban such films, but rather to encourage a close viewing, deconstruction, and critical analysis of them so that we understand the means by which filmmakers attempt to manipulate our ideas and emotional responses.

5. How do films express human emotion and human experience? How are significant moments in history portrayed through film?

Films are a powerful medium for expressing human emotion and the human experience because they work on many levels—background music to create mood or establish character; film techniques to depict realistically even the most contrived experience or historical event. Whether these techniques are used to accurately portray history is another story altogether. Take, for example, the famous film sequence in Sergei Eisenstein’s 1925 dramatized version of the 1905 mutiny of the crew of the Russian battleship, Potemkin. Using montage and an almost kaleidoscopic manipulation of time and space, Eisenstein restaged the massacres by depicting the faceless Cossack automatons advancing and firing on protesters, setting a baby carriage careening down the Odessa steps leading down to the waterfront. While Czarist troops absolutely fired on protesters in the streets nearby, there is still no consensus of those studying the primary sources as to whether or not there was also a massacre on the more dramatic location of the great stone staircase. Regardless, the scene is so dramatically compelling and rightfully famous that it has been recycled and parodied in countless films, from Brian De Palma’s Untouchables (1987), to a scene from Terry Gilliam’s dystopian Brazil in which a vacuum cleaner replaces the ill-fated pram!